Biden Is on the Wrong Side of the Death Penalty Debate

Joe Biden’s stance on capital punishment is short and to the point:  “Abolish the death penalty at the federal level, and incentivize states to follow the federal government’s example.”  See his Policy Statement, summarized here.

And it’s true that support for the death penalty has been falling since about the mid-Nineties, at least until a couple of years ago.  But Mr. Biden is still missing the point, politically as well as morally.

As Gallup’s most recent chart (from late last year) shows, Americans still support the death penalty by a significant majority, 56% in favor to 42% opposed: 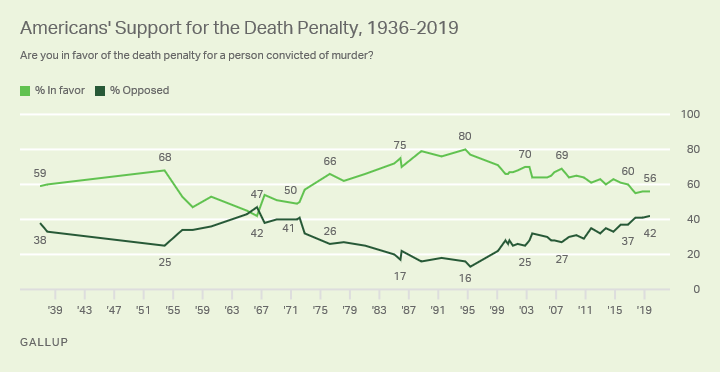 The poll also seems to show a slight uptick in support for capital punishment over the last two years.  It’s likely to continue that uptick this year, which has seen a shocking, nationwide surge in murder.

It would therefore be to President Trump’s advantage to press this issue, and do it in specifics.  In other words, the President would benefit, not merely from drawing the contrast in general, but by asking Mr. Biden which of the recent federal executions he thinks was unjust, and to put that question by describing exactly what the murderer had done.  No generalities and no fuzzing over.  Specific details.

Perhaps he could start with Keith Nelson, executed two days ago.  As Kent reported:

In October 1999, Nelson told an acquaintance that he wanted to kidnap, rape, torture, and kill a young girl he had seen in Kansas City, Kansas.  Shortly thereafter, Nelson parked his white pickup truck outside the home of 10-year-old Pamela Butler, who was rollerblading nearby.  As Pamela skated by the truck, Nelson grabbed her around the waist, threw her into the truck, and sped away as Pamela’s sisters looked on in terror.  Sometime later that day, Nelson raped Pamela, strangled her to death with a wire, and buried her in a forest…

Or perhaps the President could ask Mr. Biden about his would-be leniency for Lezmond Mitchell, also executed by the federal government last week.  As I noted at the time:

Mitchell, 38, expressed no remorse during the public portion of the execution. Asked by a prison official if he had any last words for victims’ family members and other witnesses behind glass at the death chamber, Mitchell casually responded, “No, I’m good….”

Mitchell, then 20, and an accomplice were convicted of killing Tiffany Lee and 63-year-old Alyce Slim after the grandmother offered them a lift as they hitchhiked on the Arizona portion of the Navajo Nation in 2001. They stabbed Slim 33 times, slit Tiffany’s throat and stoned her to death. They later mutilated both bodies.

I could go on, unfortunately, but there wouldn’t be much point.  Remember, Biden is not recommending that we be cautious in imposing the death penalty, or reserve it only for aggravated cases where no sensate person could doubt the defendant’s guilt.  For every practical purpose, we already do that.  No, Biden wants complete abolition.  He takes the view, not only that there is no case, but that there will never be a case, in which the federal death penalty could be just punishment.  Washington, Lincoln, FDR, Reagan and  —  ready now?  —  Barack Obama knew better, but, hey, they’re so……yesterday.