Is There “Systemic Racism” in Arrest Rates for Serious Crime? And Do Academics Lie About It?

Perhaps the single most vocal complaint about claimed racism in policing is that cops arrest blacks much more frequently than whites for the same or similar serious offenses.  Thus, Prof. Sean Hill of the Moritz College of Law at Ohio State stated in his recent op-ed in the Columbus Dispatch:

The reality is that Black-on-Black crime is a myth, and that Black and white people routinely commit crimes at similar rates, but Black people are overwhelmingly targeted for arrest.

A casual friend of mine, the highly regarded libertarian law professor Eugene Volokh of UCLA, examined this assertion in his article in Reason magazine.  He put his conclusions up front:

—  blacks appear to commit violent crimes at a substantially higher rare per capita than do whites;

In other words, Prof. Hill’s incendiary attack on supposedly racist policing is flat-out false; as we have seen so often, the demand for racism exceeds the supply.  The shortfall is filled in by lying.

I found Eugene’s expose’ of this fabrication especially convincing for two reasons.  First, libertarians are not in general wildly sympathetic to the police.  To the contrary, they, even more so than liberals, have been leading the attack against police unions, against qualified immunity, and against (what the see as) military-style weapons in police hands.  Second, Eugene’s sources are excellent  —  he uses what is generally regarded as the gold standard for crime and policing statistics, the the National Crime Victimization Survey and the U.S. Justice Department Bureau of Justice Statistics.

Eugene takes us to the original source:

Here, then, is the data from the Bureau of Justice Statistics’ Race and Ethnicity of Violent Crime Offenders and Arrestees, 2018, with regard to “rape/sexual assault, robbery, aggravated assault, and simple assault“: 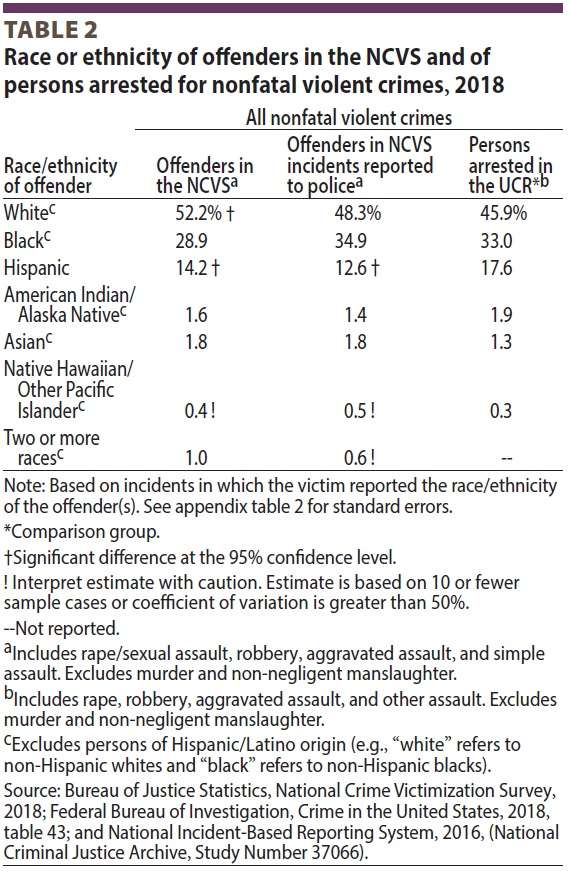 And here is the data for serious nonfatal violent crimes, which excludes simple assaults, and thus focuses on “rape/sexual assault, robbery, and aggravated assault”: 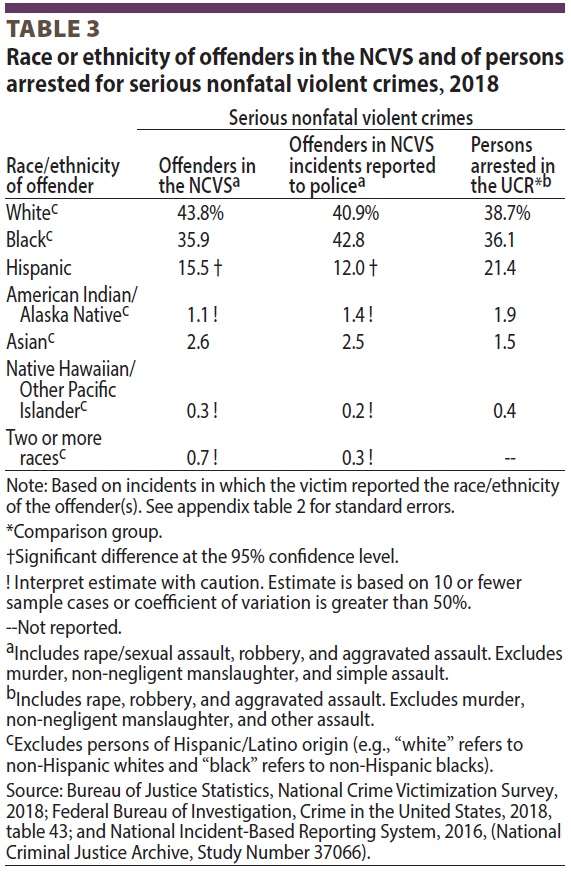 It also appears that the arrest rates for violent crime are roughly comparable to the rates of offending, especially if one takes into account those offenses reported to the police (which is a choice of the victims, not of police departments). And the great bulk of such violent crime is intraracial.

The disparity is even more striking for murder and nonnegligent manslaughter, which the NCVS doesn’t measure (since the crime victim can’t respond to the survey), and which thus relies on the police department reports in the UCR:

Many homicides are unsolved, and of course there is the risk of race-based investigation and enforcement. But again this is the best data we have, and it’s consistent with victim demographics—it’s clear that blacks are disproportionately likely to be murder victims—and the broadly accepted view that the overwhelming majority of homicide is intraracial.

Now naturally this reflects just aggregate statistics; the great majority of people in all racial groups don’t commit violent crimes, and even the aggregate data may differ from place to place. Moreover, this doesn’t tell us about property crimes (other than robbery, which is classified as a violent crime), because it’s so hard to approximate the true rates of offense commission there: Most such property crimes are unwitnessed, so it’s hard to gather survey data. And again, I’d love to hear any other data that might shed a different light on the violent crime statistics as well.

Still, the best data that I know of suggests that

—  black-on-black violent crime is not a myth;

I want to highlight especially one chart Eugene refers to, here.  It’s the FBI/UCR chart for expanded homicide data for 2019.  The most startling fact it reveals is this:  Even though non-Hispanic whites in the United States outnumber blacks by close to five-to-one, among murderers whose race was known, blacks outnumbered whites by 6,425 to 4,728.  (Black murder victims also outnumbered white victims).

I’ve said before and I’ll say again for emphasis.  Race to an extent correlates with violent crime, but it is not the cause of violent crime.  Indeed, race has nothing to do with causation.  The cause is to be found elsewhere, mainly,  in my view, in family structure and the rearing of children by a married, stable, loving, sober mother and father who value discipline when needed and educational excellence.  But the statistics are what they are, and I’m not going to either lie about them or hide them.  We’re not going to fix the problem if we won’t even look at it.

Finally, my hat is off to Prof. Volokh for having the courage to write his piece in Reason.  In our current academic climate of Be Woke Or Else, telling a truthful but unwelcome story takes guts.